Severe hemophilia is often diagnosed in the first year of life. The first signs of hemophilia in a child under the age of 2 are bleeding in their gums and tongue and surface bruises from falls. In an older child or an adult, hemorrhages often occur in the joints (particularly the weight bearing joints such as knees and ankles). These joint bleeds can cause severe pain and often permanent damage and immobility. Other mild to moderate bleeds can occur in the muscles, soft tissues, or even the gastrointestinal tract. Serious bleeds can occur in the neck, throat, tongue or brain. In addition, trauma, major surgery, tooth extractions or other minor surgical interventions may result in bleeds. 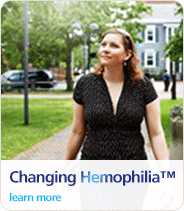 This content is for informational purposes only, and is not intended to be a substitute for professional medical advice, diagnosis or treatment. Always seek the advice of your physician or other qualified healthcare professional with any questions you may have regarding a medical condition.